The Foothills Parkway in East Tennessee is a beautiful two-lane scenic highway skirting near the borders of the Great Smoky Mountains National Park. The legislation for the Foothills Parkway, Public Law 232, was approved and passed by Congress on February 22nd in 1944. The entire 72-mile road was originally intended to stretch from Exit #443 off Interstate 40, near Cosby and Newport, TN, to US Highway 129 near Tallassee and Maryville, TN far to the west. Originally, plans for the Parkway were laid out in eight distinct sections but construction didn’t begin until the 1960s and, to date, the full parkway is still not complete. Of all the seven different U.S. Congressionally Mandated Parkways, the Foothills Parkway is the only one yet to be finished.

The first section of the Parkway to be completed (Section H) was the west end from US Highway 129 at Tallassee to U.S. Highway 321 at Walland, which lies between Maryville and Townsend. 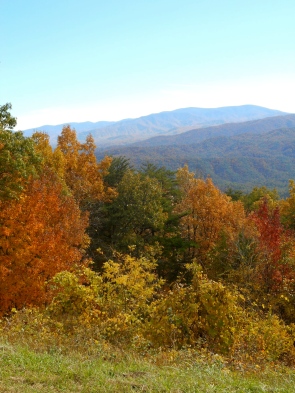 Due to funding difficulties in the 1970s, erosion and environmental difficulties, the continuing sectional pieces from Walland to Carr Creek (6.1 mi) and Carr Creek on to Wears Valley (9.7 mi) weren’t totally completed and opened until 2018, fifty-two years later. In between these years, the east end of the parkway (Section A) from Interstate 40 to Cosby, a 5.6-mile stretch of roadway, was completed in 1968, but the proposed parkway sections from Cosby to Pittman Center (14.1 mi) and on to U.S. 441 (9.6 mi) have never been started nor has the additional 9.8 mile section of the parkway to Wears Valley.

In actuality the Parkway has been in the works, since its legislation date, for over 75 years, and it will probably be another 20 years or more before all the missing sections are completed. The right-of-way for constructing the remaining sections has been purchased by the National Park Service, which is a plus, but funding is not in place for the work to be done at this time. According to the National Park Service, the next section proposed for completion is section 8D between Wears Valley on US Highway 321 and the Spur on US 441/321 near Pigeon Forge and Gatlinburg. Since the completion of the new stretch of parkway, traffic on Wears Cove Road and Line Springs Road to Metcalf Bottoms is now exceeding design capacity and safety concerns have pushed completion of this parkway section to the forefront. 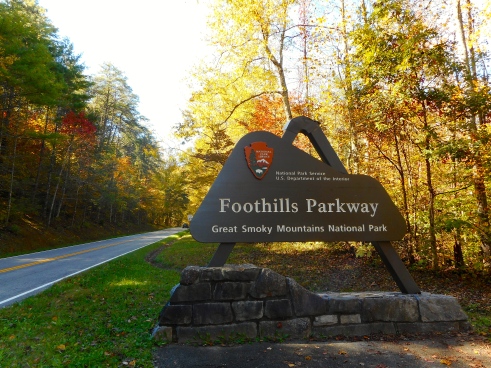 Parkway background and history aside, traveling the completed sections of the Foothills Parkway is a pleasure at any time of the year, but it is especially beautiful in the fall. Many travelers to the Smoky Mountains know little about the Parkway but locals love it as a place to travel to enjoy views of the mountains, generally without the crowds and traffic found within the National Park. Many websites call the Parkway “The Unfinished Dream” and sing of its beauty even as it is.

This week we traveled across all three sections of the Foothills Parkway to see the fall colors beginning their annual show in East Tennessee. Our journey started on the west end of the Parkway where the road begins at Highway 129. Across the street from the entrance is Chilhowee Lake, created in 1957 when the Chilhowee Dam was built. Nearby on the highway are pull over spots to see the lake more clearly or to put in a boat or fish. About a block south of the entrance Happy Valley Road winds between Chilhowee Mountain and the Smoky Mountains to Abrams Creek Campground in the Smokies. A narrow road leads to a ranger station, parking spaces, and the small campground and to several fine hiking trails. J.L. and I love to hike here and especially love the Cooper Road Trail which winds out of the back of the campground toward Cades Cove.

The Foothills Parkway rises from the road’s entrance sign gradually uphill to Look Rock with several pull-over spots along the route up. Plan to stop at the large parking lot as the road reaches its high point on Chilhowee Mountain to enjoy the rock observation deck with views toward the Smoky Mountain range.

Across the street from the parking lot, you can also hike the paved one-half-mile trail to Look Rock Tower. The path is steep but there are several rest stops along the way. At the tower, you can walk up the ramp to the railed observatory area, which offers a 360-degree panoramic view of the mountains. Signs around the deck tell you the names of the mountains and ranges you can see in the distance … and the tower, with visibility 20-miles or more on a clear day, is a great spot for photos. 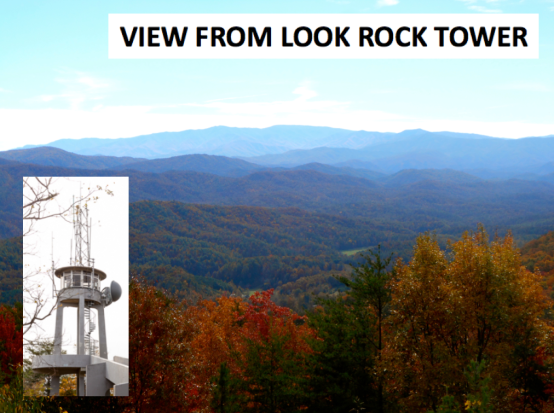 A side road beyond the observatory and hiking trail leads to the pretty Look Rock Campground which is, unfortunately closed at this time—and has been since 2016. However, the picnic area recently reopened and plans are in place to hopefully update and reopen the campground and its sites in the future. After passing this point, stop at several other scenic pull-overs as the parkway descends to enjoy views across the mountain ranges to the south and to catch panoramic views of Maryville and the valley below the Chilhowee Mountains to the north.

At the end of this 18-mile stretch of parkway, you can exit onto Hwy 321 for fuel, food, or a rest stop, or continue into the newly completed 16-mile section of the Foothills Parkway ending in Wears Valley. We continued on, following the Parkway as it rose from the gap at Walland to wind up hill along Raven Cliff Ridge and Bates Mountain to the high Chilhowee Mountain range again. We stopped often to take photos and enjoy the fall colors along the way. As this section of the Parkway rises high on the mountain, pull-overs offer stunning views toward the Smoky Mountain ranges. Where the ridgetop crests a wide pull-over yields especially fine vistas.

At these high points you will also catch views of the bridges spanning the mountain ridge tops, which were an ongoing challenge to build on this Parkway and held up completion of the road many times. As the two-lane road winds downhill scenes of Wears Valley and the ridges and around it appear until the Parkway finally ends on Hwy 321 in Wears Valley. Turning right at the Parkway’s end, the highway winds its way back for 15 miles to Townsend or the road leads east for 10 miles to Pigeon Forge.

From the Foothills Parkway sections, completed on the west end, to the finished section of the Parkway on the east end near Cosby and Newport is about a 45 minute to one hour’s drive, depending on the route chosen and the tourist traffic. We drove and explored the eastern piece on a separate day, traveling from Knoxville (where we live) on Interstate-40 to get off onto the Parkway at Exit #443.

This piece of the parkway, although short, also has several lovely pullovers with views to the Smoky Mountains. At one pullover you can see north to English Mountain and at another south to Mt Cammerer, Mt Guoyot and Mt. LeConte. The mountain town of Cosby, the Cosby Campground, picnic area, and a number of fine hiking trails are not far from the west end of the Parkway, and visiting around the area makes the trip more fun. We often take a hike after driving the parkway and make a side visit to Carver’s Orchard on the Cosby Highway, for fresh apples in the fall.

If you have never taken time to drive the three completed sections of the Foothills Parkway while in the Smoky Mountains, you might want to put them on your “to do” list for a coming visit. We love the Foothills Parkways in all seasons—in fall when the colors are a glory, in winter with snow on the high mountain ridges, in spring as the new green of springtime touches the hillsides, and in summer when the rich greens of the landscape sooth the soul.

Note: All photos my own, from royalty free sites, or used only as a part of my author repurposed storyboards shown only for educational and illustrative purposes, acc to the Fair Use Copyright law, Section 107 of the Copyright Act.