After I completed my annual Smoky Mountain book this spring, I began to research and plan four new future books, that I’d envisioned earlier, focused around a Lighthouse on the South Carolina coast. As a past professor, I love to research and learn about new things, and I uncovered so many interesting facts and fascinating stories about lighthouses that I never knew before while beginning to plan these books. A lot of the gathered knowledge I found, and many colorful stories I unearthed, will find their way into my new Lighthouse books, but I decided it might be fun to share some of the information I’ve discovered in my September blog.

Lighthouse history: Lighthouses have an old history dating back 2000 years to remains found in Egypt and in Europe. However, the modern era of lighthouses that we are most familiar with began in the 1700s first in England, Wales, and Scotland and then in the U.S. not long after when the first American lighthouse was constructed at the Boston Harbor in 1716, called the Boston Light. 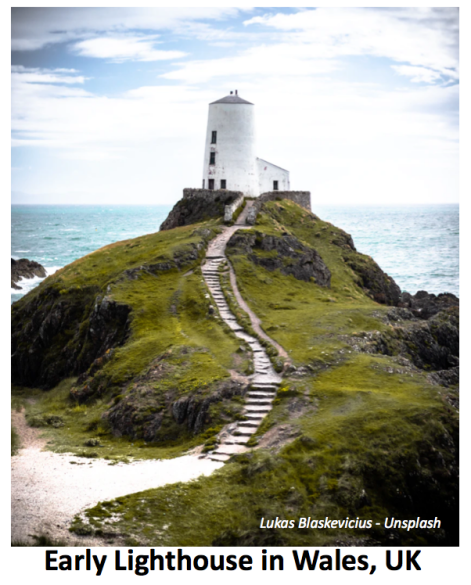 Many more lighthouses were soon built along the Atlantic coast and then on the Great Lakes and the West Coast. Lighthouses served as well-needed navigational aids in this earlier time period. They warned boats of dangerous areas in the sea and they helped to guide ships into harbor, sort of like traffic lights and signs do on land. The purpose of lighthouses was always to light the way for ships at sea, to keep them from crashing against rocks or reefs in storms and bad weather, to help them find their way in the dark, and to act as points of reference for sea captains. Every lighthouse had its own unique appearance and its own individual system of flashes that let ships know exactly where they were long before modern navigational systems helped pinpoint the way.

A total of about 1500 lighthouses were built in the U.S. with the heydey of lighthouse construction between the late 1800s and early 1900s. Today most lighthouses have been automated and few need a lighthouse keeper unless in special areas or as tourist attractions. There are about 700 lighthouses in the U.S. now, all maintained by the Coast Guard and also by those who work or live at each lighthouse location.

Thinking about a Lighthouse book: After learning about lighthouses in general, I began to look at pictures of lighthouses to decide what the “fictitious” lighthouse in my book might look like. I knew it would sit on a slightly rocky chunk of coastline on an island at the north end of Edisto Island with the Atlantic Ocean to the forefront and the North Edisto River to the side. Considering how many wrecks occurred in past at this location, many on a dangerous shelf of narrow barrier islands called the Deveaux Bank, I’m surprised a lighthouse was never built at this point, as there are lighthouses up and down the Atlantic Coast where other major rivers meet the sea. The small island I’m fictitiously using for my book setting is a quiet, practically unpopulated one, now in a conservatorship. Only a handful of people own land there and further future development is restricted on this island portion of Botany Bay Island, which is separated on all sides by water. In researching the history of the island I learned it had once been called Watch Island in the past with a small fort on it, so I took back that old name for the island for my story. I also decided to name the lighthouse the Deveaux Lighthouse, for the Deveaux Bank nearby and, fictitiously, for the family I’ve created who have kept the light through multiple generations.

It was amazing to me as I looked at all the lighthouse photos on the internet to see the huge diversity of shapes, sizes, and colors that lighthouses come in, like those above. What an incredible array of sizes and colors, from short and squat to tall, narrow and conical. They come in colors from simple white to diverse shades of red, green, gold, brown, and black and many are arrayed in Barber-shop or layered stripes, usually black-and-white or red-and-white. Some lighthouses are tall, wide, and large enough to live in, while others are tall and narrow with a steep, spiral set of metal stairs winding to the top. Others are squatty and not much taller than a person or built into another structure. Some sit right on a spit of land beside the sea, the lighthouse positioned so the light will be visible far into the nearby ocean. Others sit remotely out in the sea itself, often miles from land on small weather-swept, rocky islands or on manmade platforms. These especially, so far from land or people, looked the most lonely to me.

Many lighthouses built on the shore, or on large islands near the shore, included a complete series of buildings, or Lighthouse Station, in addition to the lighthouse. This station often contained eight or more structures that usually included a small keeper’s house or storage building connected to or beside the lighthouse, where the Lighthouse Keeper stayed during storms or at night to be close to keep the light ever burning. The station also usually included a large Lighthouse Keeper’s home in a spot nearby, built to house the big families with eight to twelve children  that people had in the 1880s and early 1900s. These Lighthouse Keeper houses were often large two-storied homes with spacious living areas, many bedrooms, and wide porches. 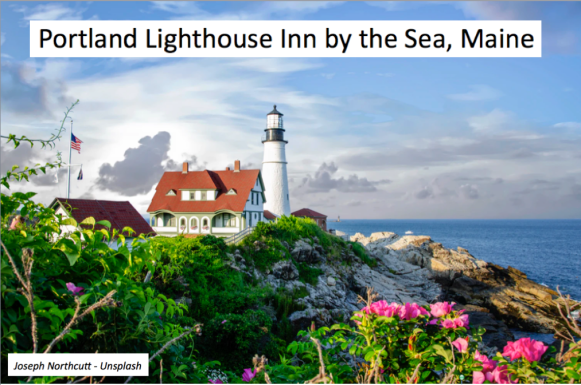 Additionally the Lighthouse Station grounds included several smaller cottages for assistant keepers or visiting supervisors, a bell house or fog house, storage buildings, a boathouse or two, one or boat docks, a well for water, fuel storage buildings, a garden area, and an outdoor “necessary house” or bathroom. Often the Lighthouse Station was fenced or walled all around with pathways leading between the different areas. The Station looked almost like a small community…. which explains why many of these Lighthouse Stations were more easily converted later to tourist resorts with cozy, seaside inns, gift shops, rental cottages, and museums. You may have seen one of these famous inns, the Portland Lighthouse and Inn, pictured above, on a visit to the coast of Maine or in looking through lighthouse photos or paintings.

Because most lighthouses were deactivated by the mid 1900s, they were frequently sold to parks or individuals to convert to tourist destinations or even to renovate as private homes. Today, many lighthouses are actually for sale at bargain prices to those who will fix them up, allow tourist visits, and who don’t mind living in often remote locations. You can visit many lighthouses along the Atlantic and Pacific coast, and abroad as well. We recently visited Hunting Island Lighthouse, shown in the photo at left, at Hunting Island State Park in South Carolina, not far from Edisto and Beaufort. Many of the Huntington Island Light’s old station buildings have been preserved, and at this lighthouse, too, you can climb to the top of the lighthouse on steep spiral stairs—if you are able—to look out across the ocean from a platform near the top.

I envisioned and planned that the Deveaux Lighthouse in my story has been converted into a tourist destination with the original Keeper’s House enlarged and renovated into the Deveaux Inn. Visitors can stay at the inn or simply tour the lighthouse, and a ferry takes guests to and from the island, which is accessible only by boat. The four books in this new Lighthouse Sisters series, take you into the lives of the four grown Deveaux daughters, Burke, Gwen, Celeste, and Lila, who grew up with their parents Ella and Lloyd Deveraux at the scenic Lighthouse Station on Watch Island. Each book focuses on the story of one of the daughters specifically but you will meet them all in the first novel, tentatively titled Light the Way.

I have always been fascinated with lighthouse stories, wondering what it must have been like to grow up in such a remote location. I’ve often seen old photos of Lighthouse Keepers lined up with their families outside a lighthouse and wondered at their lonely and often harsh life and about the choices that took them there. Early lighthouse keepers in America and abroad endured great hardship and often risked their lives in storms to keep the light burning or to perform daring rescues at sea. I hope to weave some of those old tales into my books along with the ongoing stories of the daughters’ current lives. I hope you’ll enjoy wandering down to the sea again in these four future books….In the meantime you can visit the South Carolina Lowcountry area in my Edisto Trilogy books: Claire at Edisto, Return to Edisto – both already published – and Edisto Song coming this Spring 2021.

[Note: All photos my own, from royalty free sites, or used only as a part of my author repurposed storyboards shown only for educational and illustrative purposes, acc to the Fair Use Copyright law, Section 107 of the Copyright Act.] …  Free Stock photo thanks to Unsplash, Deposit Free, and Dreamstime for photos used in this blog post.